Team Killers: Four Things That Will Divide & Destroy Your Team 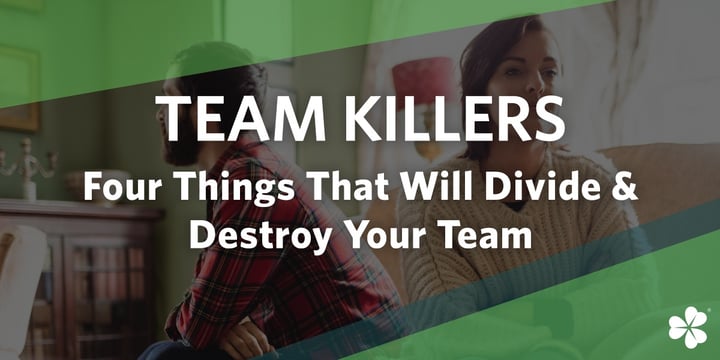 One of the most important things in the success of your church is a healthy team. If your team is thriving and working together, your congregation will feel the impact. We’ve talked in the past about a number of ways to focus on pouring into your team and keeping a healthy staff. It’s just that important!

But you don’t need us to tell you that. If you’ve worked in church leadership for anytime at all, then you’ve probably experienced the opposite of a healthy team or staff member at least once so far. And if you have, then you know exactly just how detrimental even just one unhealthy, unhappy member of your team can be to not just your staff, but to your church as a whole.

Nothing will take you off track and shift your eyes from the mission faster than behaviors or attitudes that we call team killers.

Team killers are those little behaviors or attitudes we all sometimes fall into doing or thinking, often without even realizing it!

On the surface, they may seem harmless. But left unchecked and given room to grow, they’re the things that can end up picking apart the team. Team killers are the difference between a healthy staff and a defeated staff, and I think we can all agree we’d prefer to have the former!

So to help you keep your eyes open to potential team killers, we want to introduce you to four of what we think are the biggest potential attitudes and behaviors that could divide and destroy the dynamic on your team.

Let’s be honest: Who doesn’t love a little gossip from time to time? We’d be lying if we didn’t admit there’s a little something in all of us that enjoys being the first to know information or the first to share it with someone else. That’s just human nature! But when someone on your team makes a habit of talking about others on your team or in your congregation behind their backs—whether the intention is good or bad—there’s potential for team disaster.

Because no matter how small it may seem, gossip has the power to take down the dynamic of your team, one whisper at a time. It creates invisible walls between team members that have the potential to cause irreparable damage to your team as a whole. It’s divisive, it’s secretive, and it’s a powerful team killer.

Set the standard for your team when it comes to gossip. Let them know how you want them to approach conversations like this, and then practice what you preach! Because leadership that doesn’t set the example will kill your team faster than anything else on this list!

The hope for any team of course is that each member would stay focused on the mission and work of your church as a whole. Because the best teams are always the teams working together toward a common goal. But when even one person’s eyes shift away from the goal or mission of your church and onto themselves, the rest of the team will not only feel it, but they’ll begin to struggle as well.

If you’ve played any sort of team sport in your life, think of that guy on your team—the ball hog, the show off, the one worried more about how many points he’ll score individually than actually winning the game as a team. Nobody likes that guy, right? That’s because that guy’s all about me attitude is killing the dynamic of the team and making it that much harder to work together toward the bigger goal.

There’s a reason the Bible warns so often against the dangers of pride. It’s a pretty big deal! You want a team marked by service, support, and sacrifice for one another. Self-focused selfishness should have no place on your staff, and no place in your heart.

Church work isn’t for the faint of heart. It requires a lot of time, energy, and effort, day in and day out. That’s why giving laziness even the slightest of footholds on your team is dangerous.

A tiny attitude of laziness in one person speaks volumes to the others. It shows a lack of passion or commitment to the work of the church. And that tiny spark has the power to breed negativity and create dissention in the rest of your team. One lazy team member unwilling to put in the work and carry the same weight as the rest of the people on your team can open the door for resentment, frustration, and some pretty big discord on your team.

And what’s worse, it can be contagious. Laziness that starts in just one team member can spread to the next faster than the common cold. What starts out as just one member of your staff with little work ethic can quickly multiply if left unchecked. So rather than let it spread through your team like an illness, be a leader that stops laziness in its tracks. Spread hard work and encouragement to one another instead, even when it’s not always easy!

This is perhaps the most undercover team killer in the whole group, and that makes it potentially the most dangerous. If you don’t recognize it or see it happening on your team, you can’t stop it from growing into a full-fledged disaster.

So let’s talk negativity. It starts as a simple complaint about a project, a vent about a bad day, or a frustration aired about a coworker. And before you know it, it becomes a common practice, a negative outlook or an attitude that’s permeating your whole staff. Nobody wants a real "Debbie Downer" influencing the rest of your staff with a constant glass half empty approach. And nothing will wear down the spirit of your team as a whole than that kind of negativity.

When you find yourself with a consistently negative staff member or even facing the temptation to lean toward negativity yourself (because we’ve all been there!), check it before it can grow. Stop and evaluate the heart of your team and consider what you can do to turn the negative to a positive—to save your team from the team killer.