The Three Phases of a Successful Capital Campaign 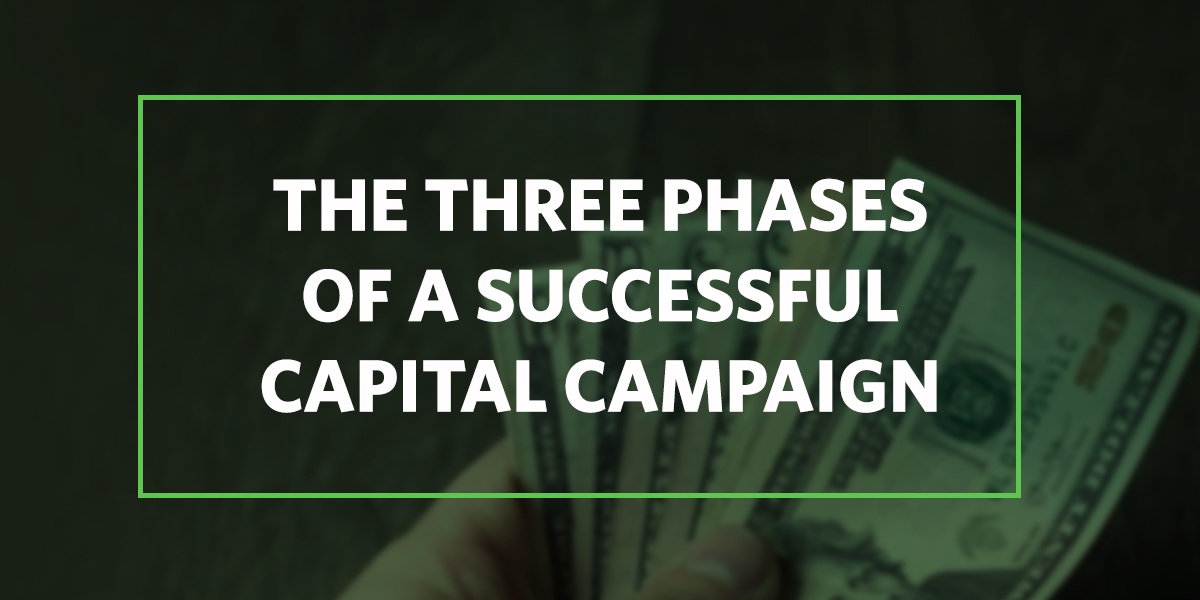 We’ve got two words for you…

You know what we’re talking about, right? That clearly defined season at your church that’s designated to raise money for a specific ministry.

Honestly, we understand both!

No matter how you feel about capital campaigns, here’s the truth: they’re probably a necessary part of life at your church.

Creating a calendar for raising money at your church is huge!

So whether you’re raising money for a specific fund, vision, building expansion, staff hire, or new ministry, we want to help make your capital campaigns both simple and successful. To do that, walk with us through the three phases of a great capital campaign…

Before you talk about the capital campaign with your congregation, there are several steps you should take ahead of time…

Clarify the goal. Make sure your goal for the campaign is clear before you start. The goal is typically the financial number you want to reach. Make sure you clearly identify it. Be realistic, but also choose an amount that will challenge your congregation and stretch your faith.

Write out your plan. There are so many details that go into running a successful capital campaign. Once you launch your campaign, however, your attention needs to be on your people, not your details! That’s why writing out your plan before you start will help you stay focused. Sit down with your team and craft the plan for your entire campaign—events, announcements, signs, sermons, social media, special stories, etc. Map them out ahead of time and write them down.

Create your calendar. Once you write down the details, schedule them. Create a calendar for every part of your plan—every social media post, email blast, announcement, sermon, etc. This will hopefully guide you through the campaign and answer the question, “What do we need to work on next?”

Do the prep work. Now it’s time to actually do some work! All the stuff you mapped out and scheduled…now it’s time to do it! Create social media posts that can be shared later. Write out letters and emails ahead of time. Stuff like this is tedious, but the more you do on the front end, the less stress you’ll feel once the campaign begins.

Rally your team. A capital campaign is about raising money for your church, but it’s ultimately about the life and mission of your ministry (and the heart behind whatever you’re raising money for!) Take time before you launch the campaign to rally your team around that vision. Get them excited about their part in helping your church reach its goal.

People love to rally around vision, so make sure you reiterate it throughout the campaign!

Make sure you think through promotional ideas when you’re mapping out your campaign plan and calendar.

Share your progress. As you continue to emphasize the financial goal you’re trying to reach, continue to update people on how close you’re getting. Celebrate big momentum and small milestones that are reached along the way. Continually thank people for supporting the vision behind the campaign.

Connect it to people. In conjunction with casting vision for your campaign, a great way to get people emotionally invested is to connect it to real human beings. Make it tangible to your congregation by sharing stories of people who will actually be impacted by the funds. Whether it’s a school, charity, family, missionary, or something else, find ways to talk about real people.

It’s easy to think the work is done when a capital campaign ends. After all, it was a lot of work!

However, you’re not done quite yet. There are a few things you need to do, not only for the sake of this campaign, but to help you set up future ones to succeed!

Share your success. You asked for a lot from both your core team and, of course, your donors. Don’t forget to celebrate the progress that was made, and don’t forget to acknowledge the sacrifice that so many people made.

If you have the margin, you may even want to dedicate an entire Sunday service to celebrate the success of your campaign and thank God for what He’s doing in the life of your church.

Sharing a story on both sides of the process—a giver and a receiver—is such an effective way to demonstrate the power of generosity!

Show your gratitude. If you get ONE thing out of this blog post, make sure it’s this…

Do it privately. Do it publicly. Do it through every avenue you possibly can. Remember, your congregation gave up something up to give to your church. That’s a big deal!

You can’t possibly express all of the gratitude you need to by yourself. So utilize your team to help you write notes, send emails and letters, make calls, etc. Not only is this a great demonstration of humility and appreciation to your donors, it’s also a great way to get them involved in your next capital campaign!