The Dos and Don'ts of Church Announcements 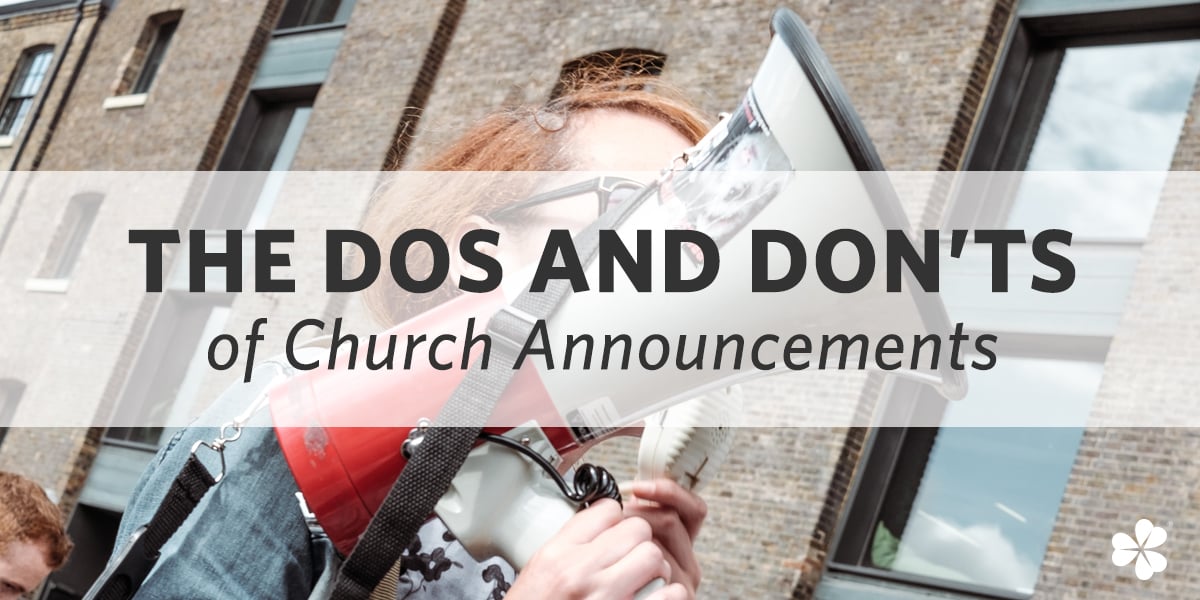 Let me ask you a question…

What’s the craziest thing you’ve done to get someone’s attention?

Listen, I think we all could tell some funny stories in response to that questions. We’ve probably all done some absurd things.

I know I have!

Like when I wore an exact replica of the Dumb and Dumber tuxedo to my senior prom...

Of course there are no pictures to prove it (or none that I’m going to share here!), but just know that I looked ridiculous! Suits like this were hard to come by those days, so I had to go out of my way to special-order it from a Halloween costume shop.

All that work, just to make sure I stood out and got some attention at prom!

While I don’t necessarily recommend you buying a Dumb and Dumber suit to get your congregation’s attention (although if you did, I’d love it!), I do imagine that you have a tough time keeping their focus during one part of your service…

Yep, we all get it! The announcements represent one of the most dreaded and overlooked components of a Sunday service!

And isn’t one of the biggest challenges of our “announcement time” getting people to actually pay attention and not zone out?

I mean, half the time they’re still settling in their seats! They’re thinking about their lunch plans, scanning their cell phones, or chatting with the people next to them.

The problem is that as a church leader, the announcements are typically the time when you’re giving people the information they really need to know! You’re talking about what’s new, what’s ahead, what they can get involved in, and what’s important in the life of your church body.

And your people are missing it.

So what do you do?

That’s where our Clover team comes in! We’ve put together our best list of dos and don’ts for delivering your church announcements. Our hope is that by applying a few of these to your church announcement process, you’ll find a way to both grab and hold the attention of your congregation as you’re giving them the info you want them to know!

Try to avoid thinking of your church announcements as information only.

Information may cause people to tune out, but vision is something they can get behind and remember.

Don’t preach a sermon! Do keep it simple!

You don’t want to talk so long that you lose your people’s attention. And you definitely don’t want to say so much that you confuse your congregation with too much information. Simple is the best way to make sure your announcements are heard and remembered.

Don’t let the list get too long! Do narrow your focus!

Listen, I know there are so many things going on at your church every single week. And because of that, the list of announcements can get long. But the longer the list, the shorter your congregation’s attention span.

Narrow the focus of your announcements to shorten your list.

Don’t let the list get so long that your people lose sight of what is actually coming. Instead, narrow the focus so that you’re talking about the things that are most important in the life of your church now.

Don’t wing it! Do practice!

When it comes to public speaking, some people are great at winging it. And maybe you’re thinking, “Yeah Luke, I’m one of those people!” Well, even if that’s true, I’ve got news for you: That’s not the case for your church announcements.

Instead of just getting up there and winging it, make sure you go over your announcements before you hit the stage. Practice them. After all, you practice almost every other part of your Sunday service: why not this one, too? Even just a quick run through will help you polish the process and perfect the delivery.

Don’t leave it on the stage! Do take it digital!

So many of us think that there is only one way to give announcements to your congregation, and that’s from your stage. And while that certainly is a great time to do it, don’t stop there. Don’t leave your announcements for the stage alone. Instead, go digital!

Don’t forget to appreciate. Do show your thanks!

What are most of your announcements about?

Pairing your gratitude with your asks will make your people more likely to want to take that next step to get involved. So offer a quick, “Thank you!” to your people at the beginning or end of your announcements so your congregation knows you appreciate them giving you their attention, time, energy, and resources throughout the week to make your ministry happen!